A journey into openness and honesty… Distilling truths about ourselves, others and life from shared experiences… Learning to live consistently with that truth… Becoming free to be who we truly are…

A dream, a hope, a belief I hold close…

I’m standing on the threshold of this life, and what comes next,
That liminal space between what was, and what is to come,
The doorway, the veil, the light, or the darkness,
Even a precipice holds no fear.
Just one more step
Shall I fall, or float, or soar?
Or find new unseen ground beneath my feet?
It matters not
Death is no more the end of life than it is the beginning
The end of one tired journey, time to start anew.

And if this belief fails me
For no-one can know for sure
If death is truly The End of this “i am”
I will have lost all, and nothing
As “i am” will not be there to say “i was”, and grieve

Sunrise will follow sunset
(If indeed there is still a Sun)
A new realm beyond comprehension
That earthly words, and dreams, even imaginings, cannot grasp

What will I perceive in this new paradigm?
And how?
Will I see, hear, touch? Will I think and feel?
Or will my senses and mind be so transformed
That perceiving and being are completely new?

I wonder now how I will wonder then.

And far more crucial than What,
Who will I find?
How will we interact, and connect, and love?
If relationships exist at all.
Perhaps a myriad of “i ams” will be “we are”
Each unique, yet all as one.

But this threshold is a far horizon
Much yet to see, love, be and do
Or maybe not
I may be surprised
And next moment wake somewhere new. 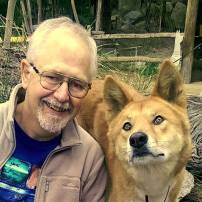 My beautiful wife Rosie passed away on 29th October  2014.
We held her funeral on November on 6th November 2014. 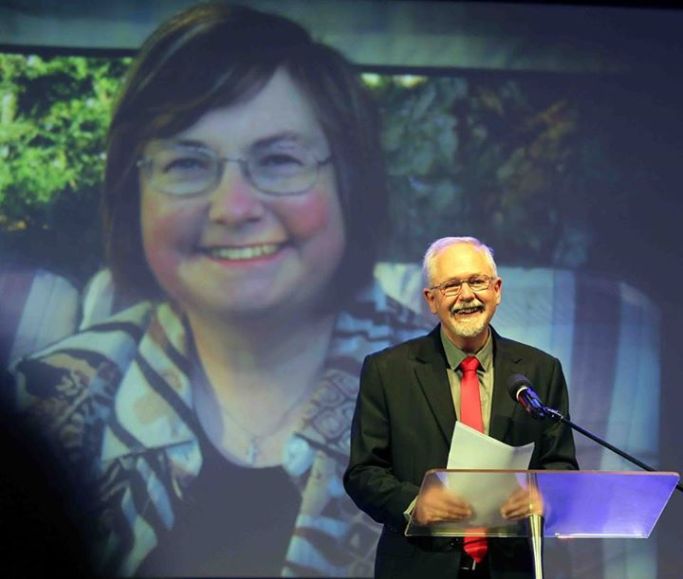 Rosie’s last hour – Live well, die well
Janet and Janice have told us how Rosie lived well… how she loved God, loved living life, and loved bringing hope and healing to the lives of many, many others.

I would like to tell you the story of Rosie’s last hour, the final step in her journey of not only living well but dying well also.

On Wednesday last week I arrived back at the Caritas Christi Hospice around 4pm after two mates had taken me out for coffee. I walked into Rosie’s room where she was laying back on her partly elevated bed. While she did not seem distressed, her behaviour was different from the two days before… Every few minutes she moved her head from side to side and her breathing was more labored. Her eyes needed a clean and her mouth was open and dry. I dampened a face washer and wiped her face and moistened her lips, but she gave no indication of wanting a drink when I offered her a glass with straw.

I held her and spoke to her and, in a barely audible voice, her final words to me were “I love you”.

Shortly after our favourite PalCare nurse arrived to say her final goodbyes. She commented that Rosie seemed restless and suggested I call the Caritas nurse. When the nurse arrived I asked if she could give Rosie a low dose of morphine to make her breathing easier. The nurse went out of the room to organize an IV drip.

In the next few minutes I held Rosie again and said to her a number of times, “Rosie you are free to go”. As I spoke she rolled her eyes in an unusual way and her breathing changed. The nurse returned just at that moment and said “My God, she’s dying, she’s taking her last breaths!” and with that Rosie died peacefully, with no trauma, and no distress.

On the one hand I was stunned and shocked… we were not expecting her to die until later in the week. On the other hand I couldn’t have asked it to happen in a better way. Rosie had continued almost pain free to the very end of her 16 year journey. A few hours earlier Rosie was alert enough to enthusiastically greet Sheralee, our daughter-in-law, who had just arrived from Perth. Just the day before Rohan too had arrived from Perth. Rosie had waited until all her children were together.

On the previous Sunday night, Rosie put in a sterling effort sitting up in a wheelchair for two hours to share in a family dinner at Caritas. It was a time of laughter and a time of tears as we all openly acknowledged with her that she was nearing the end of her journey, and prayed with her as a family.

On the previous Friday night, Rosie and I went to a glass plate making workshop that she was so determined to go to. Rosie sat at the work table in her wheelchair but was too weak to cut the glass, so instead of making separate plates, I cut the glass and we made a plate together. The precious result of our final team effort is on the memorial table in the foyer.

Only five weeks before, we held Rosie’s Farewell/Birthday party. Over 230 people attended. Rosie wanted to celebrate with others and say goodbye while she was still alive, instead of us holding a wake afterwards without her.

Rosie not only lived well, she died extraordinarily well too.

Some very famous words used by Senator Edward Kennedy when he gave the eulogy for Robert F. Kennedy have been on my heart for Rosie. I’ve adapted the words for her but I’m sure many of you will recognize them.

“My wife need not be idealized, or enlarged in death beyond what she was in life, but be remembered simply as a God-loving and compassionate woman, who saw suffering and tried to heal it, saw injustice and tried to right it, and saw the needs of so many, many people around her and gave them love, acceptance and hope.

As she said many times (not in these words but by how she lived) “Some people see things as they are and say why. I dream things that never were and say why not.”

Those of us who loved her and who celebrate her life today, pray that what she was to us and what she wished for others, will continue on in our own lives and the lives of those we touch.”

Rosie need not be idealized, or enlarged in death beyond what she was in life. Just like you and I she wasn’t perfect… but that is the very thing that gives us hope, and the inspiration to love those around us! Rosie had absolutely no doubt that God loved her regardless of her limitations and imperfections, and she worked so hard at sharing that love with so many people in so many practical ways despite her illness. She set an example of what we too can do even though we too are not perfect.

For many of you it may come as a surprise that Rosie and I did not have a perfect fairytale relationship. Up until a few years ago I suffered severe depression. For almost half our married life we lived with the stress of Rosie having cancer. She and I were like two different jigsaw puzzles thrown together to make a single picture. After 33 years of marriage we were still struggling to make some of the pieces fit and there were gaps that we had simply decided to live with. But we loved one another, were very committed to each other, and we worked hard at our relationship… and we made the distance.

So what are the things that I treasure about Rosie?

Grief cannot suppress a profound sense that life is good
Today is a day of profound grief for all of us.

For me the last few weeks of Rosie’s life, and this past week since her dying, have been especially tough. It’s been a whirlwind of people and activity that has constantly prodded the pain but kept it at bay at the same time.

However, in the moments where I have stopped to reflect, alongside the many deep emotions which have yet to break the surface, there is a voice welling up within me that refuses to be silent. It is a profound sense that despite the pain of this time, life is still good, that I have a real hope for the future, and can look forward to new things to come, and that I today I can celebrate with pride and joy the life of my amazing Rosie.